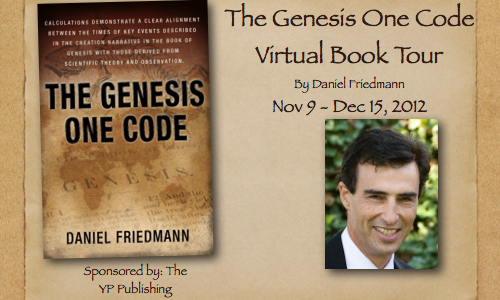 Daniel Friedmann is CEO of a large aerospace corporation. He is a professional engineer and holds a master’s degree in engineering physics. He has 30 years’ experience in the space industry, having worked on projects in fifteen countries while throughout the decades conducting extensive research. He has published more than 20 peer-reviewed scientific papers on space industry topics and cosmology. He is also a longtime student of religion.

Quickly convert from the biblical timeline of the 6 days of creation, to the scientific timeline.
Download the iTunes app here and The Genesis One Code Book here

Q -Were the heavens and the earth created 6,000 years ago, as the Bible suggests?

Daniel Friedmann – The Bible says everything was created in 6 days prior to about 6000 years ago. However, it turns out these 6 “days” were actually billions of years in duration. Thus the biblical and scientific timeline correspond – precisely.

Q -What does The Genesis One Code mean?

Daniel Friedmann – The title “Genesis One” refers to the Bible, Chapter One of Genesis, which contains the creation account. The “Code” refers to a simple formula that translates one “creation day” into time as we measure it. With this formula, 1 creation day equals 2.56 billion years – derived from biblical text wherein science and religion timelines for the development of the universe and life on earth are equivalent.

Q -What do you think will surprise readers the most?

Daniel Friedmann – Readers are shocked at the incredible correlation in the time of events – 19 events, from the age of the universe to the first life, correspond perfectly – scriptures, hundreds and thousands of years old, and science, less than 50 years old, correspond. Beyond that the three major unanswered questions in science are answered in scriptures.

Q -What is the big bang theory?

Daniel Friedmann – It is the prevalent scientific theory to explain the development of the universe. According to the Big Bang theory, the Universe was once in an extremely hot and dense state which expanded rapidly over time forming the myriad of celestial bodies we see today.

Q – Tell us where “The Genesis One Code” is available.

Daniel Friedmann – The book is available at Amazon.com and many more retailers.

creation vs evolution, bible vs science Read what Authors, Speakers and Coaches are saying about Blogging for Smarties.